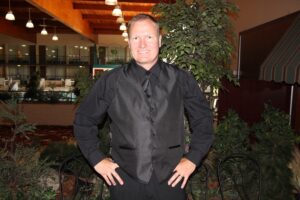 Youtube Personality
John has one of the most popular channels on Youtube for mobile DJs. Each week John hosts live streaming shows teaching DJs from around the world.

Youth Ministry
John has worked in the area of youth ministry for a number of years. He has taught, lead groups, spoke at large teen events, and entertained for a room of over 20,000 with his ministry work.

Founder/Owner
John Young is the founder and co-owner of Sound Force Disc Jockey. John has been performing at weddings and events since 1986.

Seminar Speaker/Trainer/Moderator
He has spoken at national disc jockey conventions as seminar speaker dealing with wedding procedures and wedding planners. He also trains disc jockeys from around the country in small group settings on leadership and teamwork. John is a motivational speaker in the business world (topics of positive attitude, team work, leadership) and for Christian events. He has also moderated on some international disc jockey internet boards related to different parts of the disc jockey industry.

Hall Of Fame Inductee
in 2015 John was inducted into the Mobile Beat DJ Hall Of Fame. He is only the 9th inductee into this prestigious group.